You are here: Home » Radon

Learn about Radon in the home and workplace, the risks to health, how to protect new buildings and reduce radon in existing buildings, and where to get help.

Radon is a colourless, odourless radioactive gas. It is formed by the radioactive decay of the small amounts of uranium that occur naturally in all rocks and soils.

Why is it a risk to our health?

Radioactive elements decay and emit radiation. Any exposure to radiation is thought to be a risk to health - radiation is a form of energy and can cause damage in living tissues increasing the risk of cancer.

Where is radon found?

What is a low level?

The amount of radon is measured in becquerels per cubic metre of air (Bq m-3). The average level in UK homes is 20 Bq m-3. For levels below 100 Bq m-3, your individual risk remains relatively low and not a cause for concern, However, the risk increases as the radon level increases.

How does radon enter a building?

The floors and walls of dwellings contain many small cracks and gaps formed during and after construction. Radon from the ground is drawn into the building through these cracks and gaps because the atmospheric pressure inside the building is usually slightly lower than the pressure in the underlying soil. This small pressure difference is caused by the stack (or chimney) effect of heat in the building and by the effects of wind. 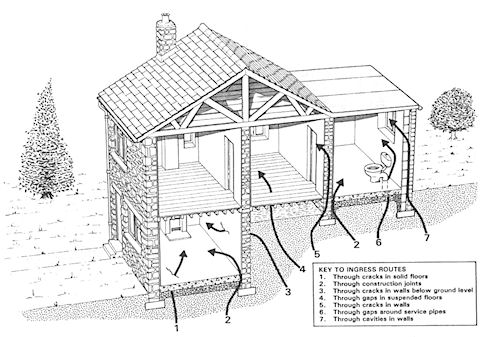 What is radioactivity and radiation?

Radioactivity is where unstable elements, such as naturally occurring uranium, thorium and radon, break down; energy is released and different elements formed. The new elements may also be unstable so the process is repeated until a stable element is formed. The energy given off is called radiation and can be alpha or beta particles or gamma rays. Alpha particles are more harmful than beta particles or gamma rays. This is because alpha particles contain more energy and are absorbed over a smaller area.

What is our exposure to radiation?

We are all exposed to radiation from natural and man-made sources. Just 20 Bq m-3 (the average radon level in UK homes) gives us half our exposure to radiation from all sources. Higher radon levels give higher exposures: that is why it is important to find out the levels in your home and in your school or workplace.

Why is radiation harmful to us?

The radioactive elements formed by the decay of radon can be inhaled and enter our lungs. Inside the lungs, these elements continue to decay and emit radiation, most importantly alpha particles. These are absorbed by the nearby lung tissues and cause localised damage. This damage can lead to lung cancer.

What evidence is there that radon is harmful?

Studies in many countries have shown that increased exposure to radon increases your risk of lung cancer.

What is the Radon Action level?

Public Health England recommends that radon levels should be reduced in homes where the average is more than 200 becquerels per metre cubed (200 Bq m-3). This recommendation has been endorsed by the Government. This Action Level refers to the annual average concentration in a home, so radon measurements are carried out with two detectors (in a bedroom and living room) over three months, to average out short-term fluctuations.

What is the Target Level?

The Target Level of 100 Bq m-3 is the ideal outcome for remediation works in existing buildings and protective measures in new buildings. If the result of a radon assessment is between the Target and Action Levels, action to reduce the level should be seriously considered, especially if there is a smoker or ex-smoker in the home. top

How can you protect against radon?

A range of practical and cost effective solutions have been developed by BRE to help reduce radon levels in existing buildings and to prevent radon entry into new buildings.