You are here: Home » News & Information

BRE is once again the home of BBC Watchdog Test House, the second series of which will be shown on BBC1 tv at 11.45am each weekday from Monday 2 March 2015. 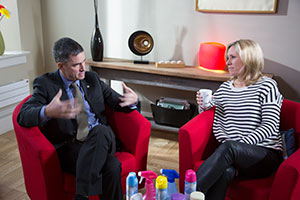 In an interview with the show's host Sophie Raworth, BRE CEO Peter Bonfield talked about air quality in homes. With modern homes being built to higher levels of airtighness, getting ventilation right is key. BRE have extensive expertise and performance test facilities for domestic and commercial ventilation systems and are experts in air quality assessment. Peter also talked about the launch of BRE's new Home Quality Mark - a new standard that will help house builders and home buyers demonstrate how key factors such as health and wellbeing, living space and levels of daylight, digital connectivity and access to transport netwoks have been addressed, as well as energy bills and running costs.

In Watchdog Testhouse on Monday 9 March you'll have seen the model of the Möhne Dam used by Barnes Wallis in the early stages of developing the Dambusters' Bouncing Bomb, and reference to the BRE Centre for Resilience where we are looking to develop buildngs and infrastructure that are resilient to the effects of increasingly severe weather.

Shown in the first programme on Monday 2 March, a dramatic fire demonstration filmed in our fire test burn hall for London Fire Bigade, and for a short film highlighting some of the more unusual test lab facilities at BRE, including our anechoic chamber and wind tunnel facility

To contact the programme, please visit the BBC Test House website: bbc.co.uk/testhouse. BRE is not able to offer comment or advice on items in the show (except where we have a direct involvement, see below)

About the house at BRE

The house featured in the show is the Prince’s Foundation for Building Community’s Prince’s Natural House, one of the demonstration homes of the BRE Innovation Park at our research HQ in Watford, 20 miles north west of London.

The show’s host, BBC presenter Sophie Raworth recorded the introductions, links and the the feature interviews at the Prince’s Natural House on the BRE Innovation Park. Discover more about the house and rest of the Innovation Park, including how to visit yourself at www.bre.co.uk/innovationpark

BRE carry out testing at commercial scale across a whole range of materials and products used in the built environment. Learn more about BRE’s large scale testing at bre.co.uk/testing. Testing of the consumer products featured in the series was filmed at organisations BRE has close links with, including BSI and FIRA. The fire test Burn Hall at BRE was used to show how a simple redesign to frige freezers could lead to them being safer, as part of a campaign by London Fire Brigade. Forensic reconstruction and fire investigation services are key areas of BRE fire research activity.

The programmes can be watched for up to 28 days after first being on tv via the BBC iPlayer – bbc.co.uk/testhouse

The material below relates to the first series of Watchdog Testhouse, originally shown on BBC1 in March 2014

Specific BRE information for programmes in the series

Programme 12, 25 March 2014
This edition had a special feature by Lynn Faulds Wood devoted to the house used in the show, the Prince’s Natural House, along with more about the research work carried out by BRE for over 90 years into how we make buildings safer and more efficient: how we work to build a better world together.  Learn more about the history of BRE and our work on energy efficieny in buildings, including BREEAM, the world's most widely used environmental assessment method for buildings.

Energy efficient light bulbs. BRE's Peter White outlined the difference in energy use (watts) of lightbulbs, explaining how using LED lighting could reduce your energy bill by as much as 90%. See the clip from the BBC website. The lifespans quoted are manufacturers' figures based on 3 hours use a day: several factors can affect the 'real life' results. Replacing 12 volt halogen spotlight bulbs with LEDs may need the transformer upgrading with a dedicated LED driver, otherwise lamp life will be considerably shortened. BRE provides lighting research and consultancy services to the commercial sector.

Programme 10, 21 March 2014
Faulty dishwashers leading to kitchen fires. A number of domestic fires have occured following faults in domestic appliances such as dishwashers, including some where manufacturers have issued recalls - see www.recalluk.com. The model shown in our fire demonstration was a brand new machine, and not one covered by a product recall. We 'rigged' this to simulate the sort fault conditions seen by our fire investigation experts in the older models, and allowed the fire to develop naturally. BRE operates a partnership with Fire Investigations UK (FI UK) to examine fires of a suspicious nature and to identify the cause and origin of the fire.

Solar panels and the Feed In Tariff: BRE spokesman Peter White talked to Sophie Raworth about the two types of solar panel  – those for heating hot water, and 'photovoltaic' or 'PV' panels that generate electricity. If PV panels are professionally installed to a home where other energy efficiency improvements (such as adding additional insulation) have been carried out, the home owner can receive an incentive payment called the Feed In Tariff, or FIT. The Feed in Tariff is explained in this page from the Energy Saving Trust. At the BRE National Solar Centre, based in Cornwall, we work with the industry to test and improve the performance of solar power systems.

Programme 1, 10 March 2014
Fire safety of furniture: In the first programme, shown on 10 March, original Watchdog pesenter Lynn Faulds Wood looked back to the 1980s to show how programmes like Watchdog and research by BRE’s fire research teams led to the introduction of some of Europe’s most stringent fire safety regulations for furniture. The BRE fire safety film Front Room Fire, made in 1985, was shown as part of this programme. Buy the film from BRE Bookshop or search 'Front Room Fire' on YouTube