The sanitation systems most widely used in developing countries are various forms of pit latrine, and design improvements in the past thirty years have upgraded what used to be a crude and temporary system into one which is desirable as well as affordable. But the chambers of “permanent improved pit latrines” have to be emptied at about three-yearly intervals, and their sludge contents have a wide range of flow behaviour and are notorious for being difficult to handle by conventional vacuum tanker. 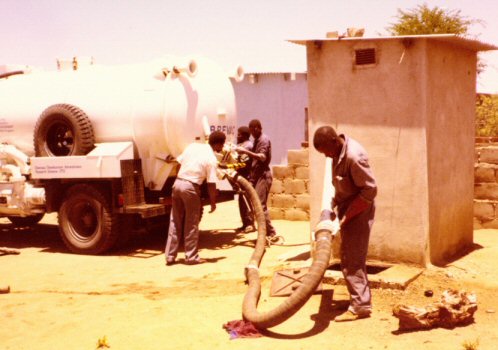 The contents of pit latrines are very different from domestic sewage in developed countries. In particular, the liquid content can be as low as 50 per cent, and there are usually considerable quantities of sand and stones, together with rubbish such as rags, pieces of wood, bricks and bottles.

The main constraints on designing an emptying system were found to be the viscous and abrasive nature of the sludge, and the fact that in many urban housing areas with uncontrolled development, access to individual household latrines is often very limited.

To cope with this difficulty, BRE developed BREVAC, which combines a partial vacuum effect with pneumatic conveying. There was also thought to be considerable potential for use in the UK, particularly in the oil and water industries for emptying settlement lagoons.

After carrying out exploratory pumping trials out at Garston . It soon became clear that the only feasible method was a suction system employing a flexible hose, and a specification was devised for what became known as the BREVAC suction tanker. A prototype BREVAC tanker was built by Airload Engineering Ltd and was shipped to Botswana in September 1983 for extensive field trials in conjunction with the Botswana Ministry of Local Government and Lands, the World Bank and the WHO International Reference Centre for Wastes Disposal.

BREVAC is able to pump over horizontal distances of up to 50 m and vertical lifts of at least 6 m, allowing for the depth of the chamber and the height of the vacuum tank. The storage capacity is over 5000 litres, and sludges that cannot be pressure ejected can be discharged by tipping the tank.

Trials showed that BREVAC handled compacted pit sludge effectively and hygienically, but the high capital cost was a major drawback to wide application in developing countries. More effective planning of pit emptying services – and of urban layouts - can reduce costs. Another option was the development of very small machines such as BREVAC Limited Access which comprises a liquid ring vacuum pump system, mounted on a Land Rover or similar suitable pick-up truck and working with a fleet of mini-tankers to collect and transport pit sludge to disposal.  (A liquid ring pump is a rotating positive displacement pump where the vanes are an integral part of the rotor. They churn a rotating ring of liquid to form the compression chamber seal. They are an inherently low friction design, with the rotor being the only moving part.)

The development of BREVAC, and of the Permanent Improved Pit latrine, was carried out by BRE as part of its programme for the (then) Overseas Development Administration. 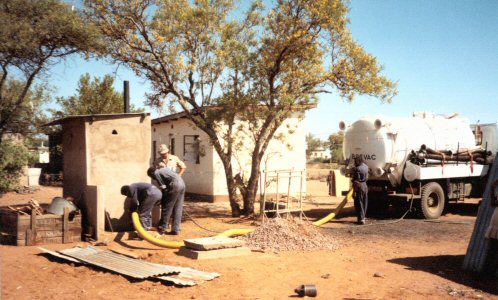