news from the BRE Group

published: 9/3/2016
This press release is over six months old and the details may have been superseded. Please contact the Press Office for the latest information.

The winners of the BREEAM Awards 2016, the world’s leading building rating Scheme, were announced at a ceremony held last night at the London Marriott Hotel in Grosvenor Square.

The winners were drawn from highest scoring buildings in 2015 – under the BREEAM schemes for assessing building sustainability – and include many of the most innovatively sustainable buildings in the UK and countries across Europe, including France, Holland, Sweden and Turkey.

The awards cover a variety of sectors including residential, retail, industrial education and health care as well as project types such as new build, refurbishment and in use. 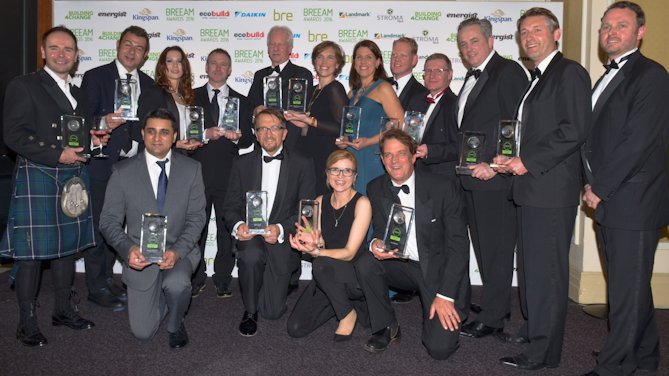 The winning buildings were:

•         The Enterprise Centre, University of East Anglia (Education and Healthcare)

•         Five Pancras Square, London Borough of Camden (Mixed Use and Other Buildings Award)

Speaking at the awards BREEAM Director Gavin Dunn said 'These awards embrace a range of property types, developed for very different budgets, business drivers and locations. But the inspirational projects have a common aim: they are all delivering sustainable value. Property investors and owners are seeing improved return on investment and reduced operating costs. Occupants are enjoying healthier, more comfortable indoor environments and more productive workplaces. Our environment benefits from these projects’ responsible use of natural resources. These are quite simply better properties to buy, own, live and work in. Congratulations to all winners and to all those shortlisted.'

Also receiving awards on the night were design and engineering consultancy Grontmij, who were announced as BREEAM Assessor Company of the Year with individual Assessor of the Year awards given to: James Warne, Boom Collective, Kartik Amrania, Grontmij and Magdalena Krause, CH2M Hill.

PhD student at University of Reading Mitchell Curtis was the recipient of the first BREEAM New Talent Award which recognizes the most successful students in the BREEAM Accredited Graduate (AG) course.

The coveted and highly competitive people’s prize – the Your BREEAM Award  - which gives members of the public the chance to vote for a BREEAM building they love, was given to OVG Real Estate for The Edge in Amsterdam.

Celebrating its 25th anniversary, BREEAM has helped shape the built environment and positively contributed to better buildings. As the world’s leading sustainability assessment method for buildings and communities, BREEAM has issued more than 530,000 certificates and has a global reach of more than 70 countries.

To download the awards brochure from the evening go to www.breeam.com/awards