news from the BRE Group

published: 27/5/2014
This press release is over six months old and the details may have been superseded. Please contact the Press Office for the latest information.

BRE Group and Shenzhen Municipal Government are to collaborate on a range of initiatives designed to help Shenzhen meet its aspirations to become China's greenest city.

As one of the four Tier 1 cities in China and with a population of over 10 million people, the City of Shenzhen in Southern China has been chosen by the Chinese government to be the pilot city for a number of new radical policies and reforms on sustainable development, Shenzhen Green Building Promotion Policy, which now requires all new residential buildings to be planned, constructed and operated according to the Shenzhen Green Building Technology Standards and Guideline, and achieve at least 1 star level in China’s national 3 star rating system. 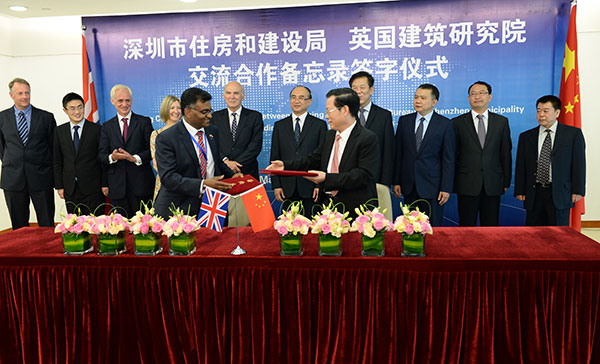 The agreement between BRE and Shenzhen government will seek to establish BRE’s China head-office in Shenzhen, which will provide the base for collaborating on a number of areas including standards, research and professional training. The collaborative agreement was signed yesterday with Shenzhen’s Housing and Construction Bureau, in the presence of the Shenzhen Mayor Mr Xu Qin and UK Secretary of State for Business Innovation & Skills Dr Vince Cable.

Speaking at the event Mr Cable, said: "The UK has a strong competitive edge in building modern and environmentally friendly cities, through our world-class expertise in architecture, consultancy, design, IT and engineering. China is paying increasing attention to green building standards and BRE’s BREEAM standard is considered among the best. Today's announcement is good news for BRE as well as the many of other UK supply chain companies who stand to benefit."

Mayor of Shenzhen, Xu Qin, said: "Our long term partnership with BRE will allow us to collaborate on standards, research and training to support us achieve our goal to make Shenzhen the greenest city in China." He added “I invite other leading UK organisations to come to Shenzhen and take advantage of our favourable economic trade policies and support the green building and urbanisation programme in Shenzhen and China.”

Jaya Skandamoorthy, Director of BRE China said: “We are excited by the collaboration with the Shenzhen government and supporting them to achieve their goal to be the greenest city in China. We hope our international BREEAM standards, research and training programme will provide a platform for leading companies, British and Chinese, to collaborate on green products, technologies and buildings.”