We have recently created a demonstration home as part of the BRE Innovation Park at Watford which has been adapted to be resistant to flooding from water up to 600mm (2 feet) deep, and also to be resilient to the effects of being flooded beyond that – in other words, it is designed to dry out quickly and be suitable to move back into in a very short time after a flood incident.

At present, following a flood, builders repairing a flood-damamged home would strip off soggy plasterboard, take out the flooring and rip out a saturated chipboard kitchen. But, once the house has dried out, then they’d very likely put plasterboard back in, install a new chipboard kitchen, and use non-water resistant flooring and insulation materials, which, if the home were to flood again in the future, will suffer the same fate.

The BRE Flood Resilient Repair Home aims to show alternative replacement products in the repairs that will not be affected by subsequent flooding; products that are resilient. It also shows how simple measures such as placing electrical outlets higher up walls and using doors and windows with flood resisting seals can help minimise future damage. And, if water does get in, an automatic 'sump pump' connected to drains in the floor quickly gets water out of the house again.

Although the house is designed to be water resisting and resilient, it still looks and feels 'homely'. See some of the measures installed from this slideshow:

Resistant and resilient measures used in the house include:

As well as these measures, other things have been done to keep vulnerable items out of the way of any future flood water:

To prevent flooding entering the property by seepage from under the floor (which happens as groundwater rises, even if floodwater doesn’t reach the door)

And finally, to stem the flow of any flooding that reaches above the door sill level: 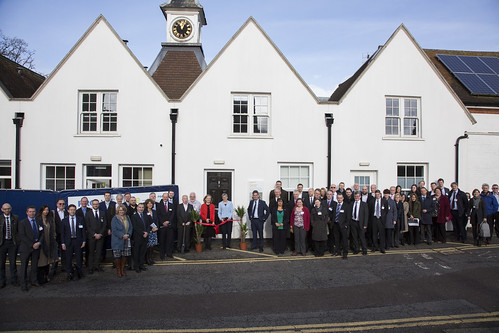 As seen on BBC Countryfile

For the filming for BBC Countryfile, several thousand litres of water poured into the home. Altough this only created a shallow 'flood', this would have caused severe damage to most homes, and taken days or weeks to properly dry out. Here, just an hour after filming was completed, the water had all been removed via the floor drains and sump pump, the floor was dry and you would not have known that the house had been flooded at all. See the clip from the BBC iPlayer (UK only)

Read the blog below from Chair of the Environment Agency, Emma Howard Boyd, and chair of the The property flood resilience action plan, BRE Chief Executive Peter Bonfield:

Building flood resilience into the fabric of Britain

Our climate is changing.

We are seeing more extreme weather events which could lead to increases in heavy rainfall and significantly increased risks from river and surface water flooding.

A growing population means more houses, which means more people will be at risk.

Sponsors and supporters of the project

BRE Centre for Resilience would like to thank the following organisations and companies who have contributed to the flood resilient repair project.

If you want to learn more about planning for flood risks a look at our flood resilience and protection online courses.